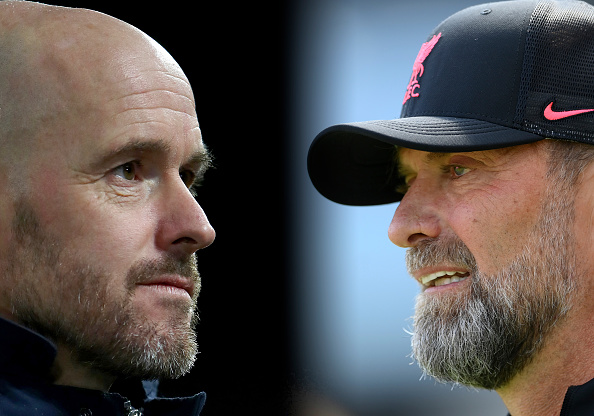 Patrice Evra has claimed that Manchester United’s players ‘fooled’ Erik ten Hag into thinking they were up to the task after an impressive pre-season.

United won three, drew two and lost one game during pre-season, including a brilliant 4-0 victory over arch-rivals Liverpool, which gave fans hope that new manager Ten Hag had brought the squad back to their best.

However, the Red Devils have now lost their two opening games of the campaign, with the players looking devoid of all the confidence and skill they had shown in the summer, putting in terrible performances against Brighton and Brentford.

United legend Evra believes that while the players are accountable for the results, the manager himself was also too easily tricked by what he saw in the friendly fixtures.

‘There’s no confidence and we have got carried away with the pre-season,’ the former defender told Betfair.

‘When the league starts things are totally different, sometimes I even prefer to have a bad pre-season, then it means you have to work hard, your legs are heavy. When you’re too sharp in pre-season and you look good, that means you’re not working hard enough.

‘I always have so much respect for the players but now I think it’s time for them to take some responsibility.

‘I also blame Ten Hag, he’s been fooled by all those players, the same way other managers have been fooled by them. In pre-season they looked so good, and he would have been excited to make them even better, but no.

‘Psychologically they are broken. Every time they face a difficult challenge, those players won’t overcome it. It’s been like this for years and it’s the same thing, it doesn’t even hurt anymore, it’s deja vu.

‘People aren’t blaming Ten Hag, but I’m sorry, he came in like, “I can do it”, and he can’t until those players leave. We have to rebuild everything and with those players we won’t go anywhere.’

Things don’t get easier for United however, with a clash against Liverpool on Monday night next up on the agenda, and while it pains him to say it, Evra doesn’t hold much hope for his former side.

‘We are touching rock bottom right now, against Liverpool we will need a miracle,’ he added.

‘The only positive thing is Liverpool haven’t won a game yet, so they also don’t look ready yet. So, maybe this match can boost the players’ confidence.

‘If Liverpool are arrogant, we can beat them. But if Liverpool come into this game motivated after they haven’t won any of their first two then they will destroy us.’

Manchester City Reignite Their Interest For Benfica’s Wing Back

Liverpool keeping tabs on this gifted starlet- The 4th Official